Regardless, we showed up in time to quickly get registered and sneak off to Jiz Lee and Shine Louise Houston‘s workshop on affiliate programs. For those unaware of what an affiliate program is, let me give you a bit of a walkthrough.

An affiliate program at the bare bones level lets a person become an “affiliate” of a website, meaning that they put up a unique code on a website that they maintain advertising another site. For simplicity’s sake, we’ll use Cherrystems as our example. Jane talks about Cherrystems on her blog a lot, and she wants to link to us. While it’s all fine and good just to send traffic over, wouldn’t it be nice if Jane got a bit of cash for sending us all that traffic? That’s what an affiliate program rewards. When someone clicks her unique link to Cherrystems, it leaves a cookie in their browser’s cache (cookies are just a text file that gets stored for a certain length of time in your browser’s cache, letting you do things like stay logged in to a website) so that Cherrystems knows how that user originally got to the site was via Jane’s link. Still with me? Lovely!

When someone that clicks Jane’s link *joins* Cherrystems, that’s where the dollars come in. We offer a 20% cut of all referrals on a recurring basis to the general public. So let’s say that someone clicks Jane’s link, then joins Cherrystems on a 3-month term (automatically recurring, or automatically charged every 3 months). That’s $40 every 3 months that that person pays, and Jane gets 20% of it every time they pay. That’s $8 every three months. While that doesn’t seem like much, it adds up when multiple people click through and join. If Jane refers 8 people at that level, that’s $64 every 3 months, and an extra $256/year just to have a little banner up.

Advertising is expensive. Cherrystems has advertised in magazines like Bust, and we’ve sponsored a bunch of events. The thing about throwing money around like that is that it only gets about a 3% return on the investment amount. Affiliate programs mean that a company doesn’t have to pay out of pocket to get advertising space, and that we can pass on actual cash to individuals that help us out.

You can actually find our affiliate program here. For example, here are some of the banners we’ve got: 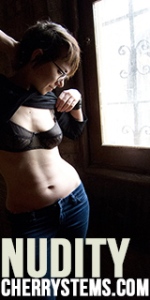 You would need to go sign up for our affiliate program and get your unique link started up before any of these banners will make you any money, of course. 😉

That talk was great for me to sit in on, because it made me realize how little the CS team actually knew about promoting themselves and Cherrystems. It’s a new thing to focus on!

The day passed by all too quickly, and bled out into the night. Aaron, myself, and Bee headed over to Bar Mercurio, where I briefly met Lynn Comella, and Constance Penley, and ended up spending up the night hanging out with a great friend, Kevin Heffernan and Sarah Stevens and her partner. Pizza was had, jokes were made, and the night was ultra relaxing.

I skipped out on the Switch party that night though. The trouble with the Switch party for me is that I’m not one that just jumps right into an intimate encounter at a sex party. There just aren’t enough spaces at the Aslan studio for me to chill out and get to know anyone, and instead I end up feeling and acting super awkward – hah! So this year I just decided that pizza and cocktails and an early night would serve me best. All the other Cherrystemmers, however, hightailed it over there and had a great time. 🙂

And now it’s time for me to go away! AWAAAAY!