I’ve been working in travel since I was 20 years old. This year, I’m celebrating my 30th birthday.

I’ve spent 10 years of my life on the road, and it’s definitely catching up to me. Think about that a bit. 10 years of my life, I’ve been nomadic half of the time. Sleeping on trains, airplanes, in hotels, on couches, air mattresses, and quiet corners of airports and bus terminals.

I can’t actually sleep on airplanes. Even with first class upgrades (bring presents for your flight crew, kids).

The half of the time that I spend at home has always been treasured. I live in a small(er) city in the middle of a vast country. We’re essentially cut off from the stress of big(ger) city living. If you don’t know about my 700,000-strong hometown of Winnipeg, you can read all about it here on the internet. Our housing prices are reasonable, and so I am a homeowner without having to sacrifice lifestyle or time dedicated to my hobbies (like the pornz).

My home has always had to be the most comfortable place in the world for me. Back in 2005, when I was getting started on this whole travel gig, I was single-ish (one of those relationships you know isn’t going to be super long, but it’s nice at the time), and coming to grips with leaving town for 5 days about 4 times a month. And then I worked my first trip. I was an attendant on board the Canadian – the transcontinental train that goes from Toronto to Vancouver. We worked 18 hour days while we were working, with 6 hours off in which you were to wash yourself (even just a bird bath), sleep, and then also get ready in the morning. All in these wee tiny on board compartments. Sometimes you’d get a bigger compartment to sleep in, but that was rare. It was usually a 1-bed room (and when the bed is down, that’s it, there is no more room) or a berth with a curtain separating you from the rest of the train.

One of the times I had a larger compartment. And some trees. They look like the ones around Jasper National Park.

The beds weren’t that bad, honestly, and I got used to the gentle rocking of the train putting me to sleep. I kinda liked it. Pair that with the fact that I fell asleep with headphones in listening to Radical Face, and you’ve got a pleasant sleeping locale. The trouble was the length of time we were allotted to sleep. At best, for years, I’d get 5 hours of sleep. Usually, it was the kind where you close your eyes, completely exhausted, and open them again to find that 5 hours have passed and your alarm is going off. I would routinely pass out on a milk crate in a locked kitchen somewhere.

And so home has always had to be exactly what I needed it to be. I bought my single ass a fucking amazing king sized bed for those days that I was at home. Is home really still home if I was spending 20 out of 30 days of the month on a train? Yes. So much yes.

I lived by myself in a 1-bedroom apartment in the French quarter (I am a speaker of the French language and a haver of the heritage) – the third floor of a three-storey walkup. At 20, this was my third apartment, and the first that truly felt like home.

This little place on Enfield. I was almost never there, but it was where my favourite memories were made.

This was the first place I’d felt comfortable enough to call home.

And there in that comfort, my story really came together. I made Cherrystems on that shitty folding chair on a computer I spent most of my life away to afford. We shot almost all of the early sets in that living room, or kitchen, or bedroom. I met Aaron shortly after moving in, though I decided to take some of his friends here for some nights before considering that he could be every single thing I needed in a partner. He moved to Malaysia for a while, where he worked for a women’s rights organization as a developer, I kept falling home here and cultivated a small following of amazing folks ready to change the city. Amazing how a space can sit empty for so long, but mean so much.

I continued to drag all my luggage up that three-storey walkup for four years. But I wasn’t happy just being away for 20 days a month. No, sometimes I’d end up with a week off near the end of the month, and I’d get my ass back on the fucking train and go as a passenger. They fed me there, and I had a place to sleep, and I was out and experiencing. I went to Halifax, Montreal, Vancouver, Toronto, and stops in between – all before I was 22. I scattered myself out as far as I could, letting home be a place that I still had. I can’t tell you what a privilege that was and is. Without even the concept of that place, I don’t know how I would have held my shit together. 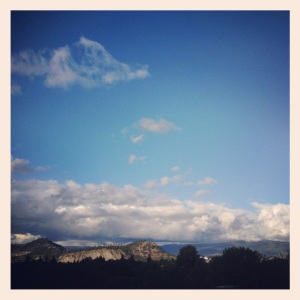 They don’t have these in the prairies.

The train was mostly full of older folks from around the world. I learned from them constantly. I learned the good things, I learned about the people I wanted to become, and the people I learned the most about were the ones whose stories repulsed me – racists, bigots, etc, etc, etc. I spent 5 years at that job, being a tour guide for Canada, telling the real stories of Canada’s colonization, even if it was uncomfortable for 65 year old Europeans to stomach.

Things changed slightly when Aaron and I decided that we would become a partnership. We decided we’d move in together, but both our places were too small. We moved. I left the place that I felt at home in. We spent two years in a place I hated. During that time, however, I also switched jobs. I left the train behind and took to the sky.

A bestie of mine joined me on a 3-day layover in Barbados.

One of the wonderful things I’ll say about the relationship that I have with Aaron is that I have always worked on the road while dating/living with/being married to him. We have never known life any other way. Other people I would date would take it personally when I got called out to go somewhere. They’d feel jilted that I was never in town, and I completely understand that. I was off having adventures while they were “stuck” at home. They were travellers too, but couldn’t do it nearly as much as I was able to.

My layovers were never, ever, spent in my hotel room. I learned the layouts of cities. I am proficient in the transit systems of Victoria, Vancouver, Kelowna, Prince George, Calgary, Edmonton, Saskatoon, Thunder Bay, Toronto, Montreal, Quebec City, Halifax, New York, Washington, Boston, Orlando, Fort Lauderdale, Miami, Nashville, San Francisco, LA, Seattle, and the highways of countless other places where I’ve rented a car because of lack of transit services. I’ve driven the interior of the US and been to fucking weird little motels that wouldn’t let me stay there because I wasn’t married to my partner.

I climbed a hill in St. John’s, Newfoundland, and met a person that became a great friend. He also worked in travel in a way – for a traveling acrobatic circus called the Cirque du Soleil. I’ve met people on hills, in bars, on bikes, in seats, and learned a little bit from each one.

This is backstage at a Cirque du Soleil show in my hometown. A direct result of climbing Signal Hill in St. John’s, Newfoundland and making a friend.

There’s honestly no lesson to be learned either way from my life. I managed to get a Bachelor of Arts somewhere in all the mess of not being home, but I managed it.

Glamorous Prince George, BC. I actually fucking love it there.

I’ll post more individual stories about the people and experiences I’ve had along the way, but for now, this post is probably long enough.

The Polyphonic Spree was playing while I was on a layover in Vancouver. So I went.

Is there anything you’d like me to address, cover, or recount? Let me know in the comments and I’ll think about it. When I’m home.